In the following I will explain how to use Google Patents to search for patents that have been filed in two different languages for terminology research. To some extent, the same goal can of course be achieved with an Espacenet search (Espacenet is the database of the European Patent Office, EPO) or a search of other patent databases by other patent offices. However, I found Google Patents the best search engine for full text searches. As far as I know, it is also the only search engine that can simultaneously display paragraphs in two languages. More on that below.

Caution: Google sometimes feeds its own machine translation results or those of other machine translation engines back into its search. Therefore, all terms in the search results should be thoroughly vetted before using them. It also does not distinguish between abysmal (and sometimes wrong) translations and great translations. This is where the translator’s subject matter expertise comes in.

Caution: Due to different conventions/regulations in different countries, patents are not always in one-to-one correspondence. For example, some patent offices allow multidependent claims that in turn depend on multidependent claims, while other patent offices do not and the patent needs to be restructured/rewritten. Again, this is where the translator’s subject matter expertise comes in to recognize these differences.

Searching for patents in two languages

Suppose you want to search for patents in the combination English-German, whereby German is the source language, and the patent has been translated into English. This can be useful if you are translating a patent from English into German and are unsure about the translation of a particular term into German. In this case, it is better to search for existing patents that have been filed in Germany (or Austria or Switzerland) and translated into English from German, because a native German speaking inventor/person skilled in the art will obviously get the terminology right. Other scenarios and language combinations are of course possible, but in order to be concrete, let’s stick with the English-German scenario.

Upon clicking the search button, the following results display: 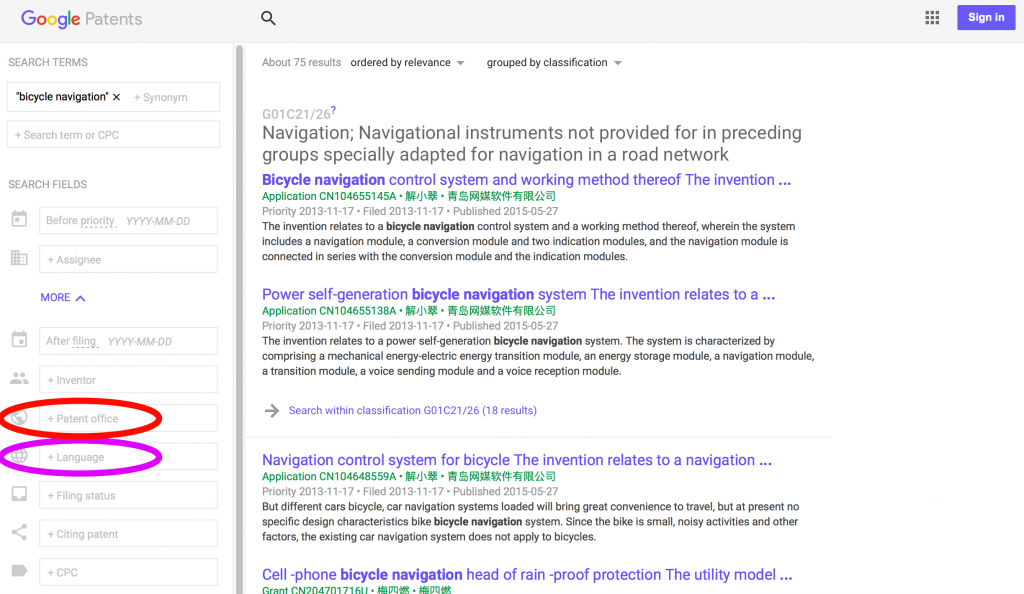 Note the search bar on the left with advanced search options, because we will use these to narrow down the results to patents that are available in our desired language pair. The patents shown in the results are obviously in English, since we entered a search term in English. In cases where a search term can be interpreted in multiple languages, the results may contain other languages as well, but that will be obvious from the displayed excerpts. We now want to find patents on “bicycle navigation” that are also available in German. The obvious option is to select “German” in the dropdown “Language” (marked in pink in the above screenshot). However, I have found it more useful to select the German patent office “DE” (marked in red in the above screenshot) instead, because this will show the patents that have not only been translated into German, but were actually filed in Germany. This also helps with tracking down patents that were originally filed in Germany (or Austria or Switzerland) and subsequently translated into another language. This is helpful for terminology research, since those were most likely written by native speaking inventors/persons skilled in the art. 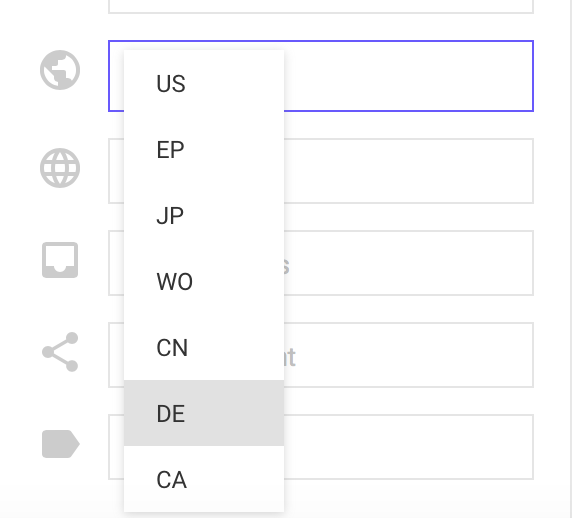 The result of the search by patent office clearly displays patents that indeed seem to have been written by native speakers (judging from the names). 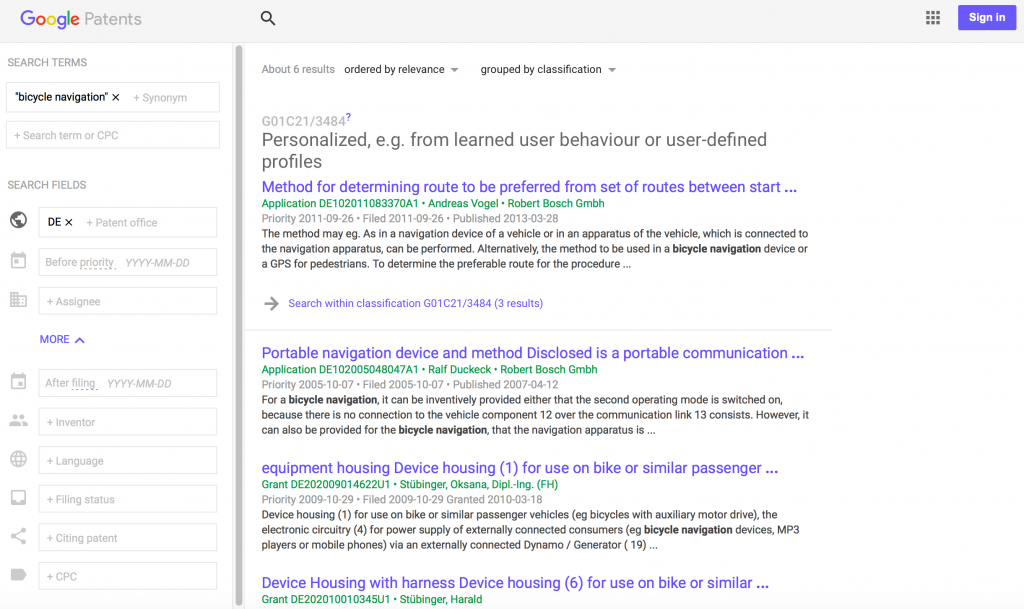 Clicking on the title of a patent opens up this patent. The patent is displayed with abstract and full text plus figures (if available), the classification, along with additional information such as the names of the inventors, various relevant dates, related citations, and a link to the original patent in the database of the respective patent office (Espacenet and DMPA in the example shown below). There are also various links to find prior or related art. 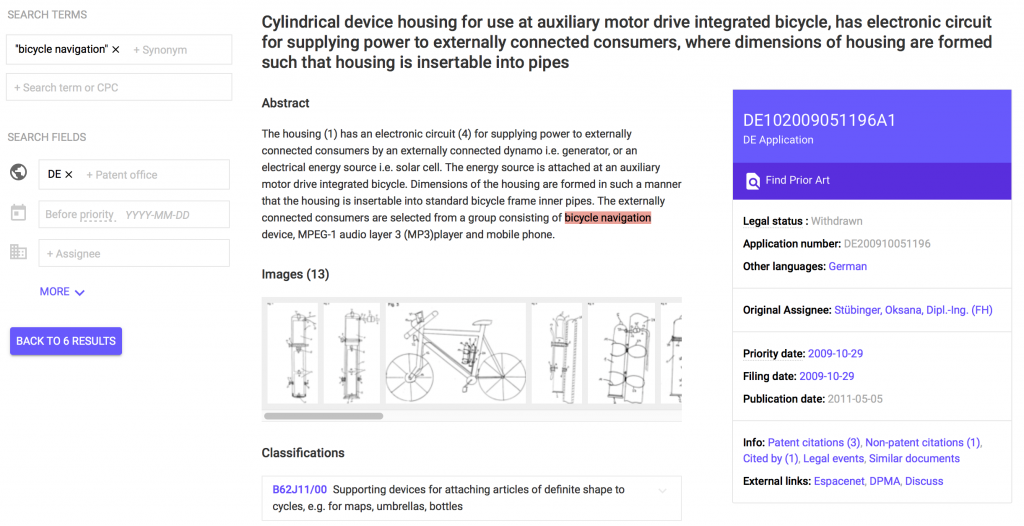 The advanced search dropdowns are self-explanatory.

This is where the Google Patent search is most useful for translators. Shown in the screenshot below is what happens when you hover with your mouse over a section of text. Google displays the translated text (or in this case, the original text) for this section in an overlay, so you can compare the two languages instantly. Google also highlights your original search term, in this case “bicycle navigation” in another color (usually cyan, pink, red, purple, or the like). 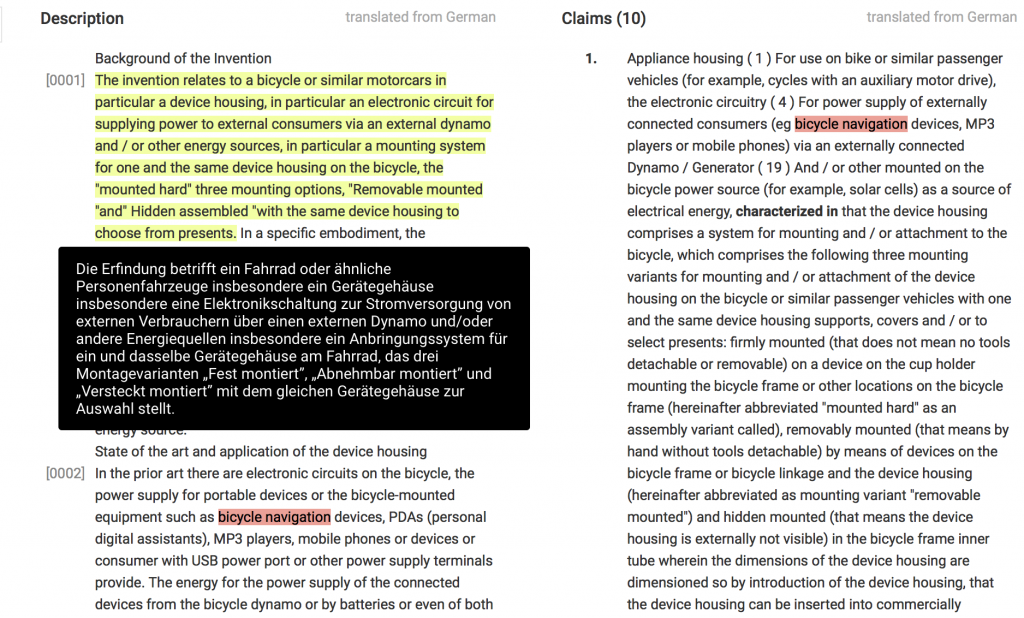 In the end, it is up to the linguistic and subject matter expertise of the translator to use the Google Patents search engine properly. But for persons skilled in the relevant art it can be a very valuable tool to track down particularly tricky or novel terms.

Thanks for the interesting article Carola!